My biggest passion has always been snowboarding since I was about 12 years old, I am so grateful that I can now share this passion of mine with my Fiance and my son Jackson. This season we made the decision to get a family season pass for Whistler Blackcomb and focus on spending some quality time on the mountain, where we feel more alive than ever. I don’t know what it is about being up there that makes us feel so great but we never have a bad day on the hill. Those days are always filled with smiles, laughs and good times. The fresh air that we breathe, being surrounded by hundreds of peaks and millions of trees, there is something about being out in the mountains that I can’t compare with anything else. 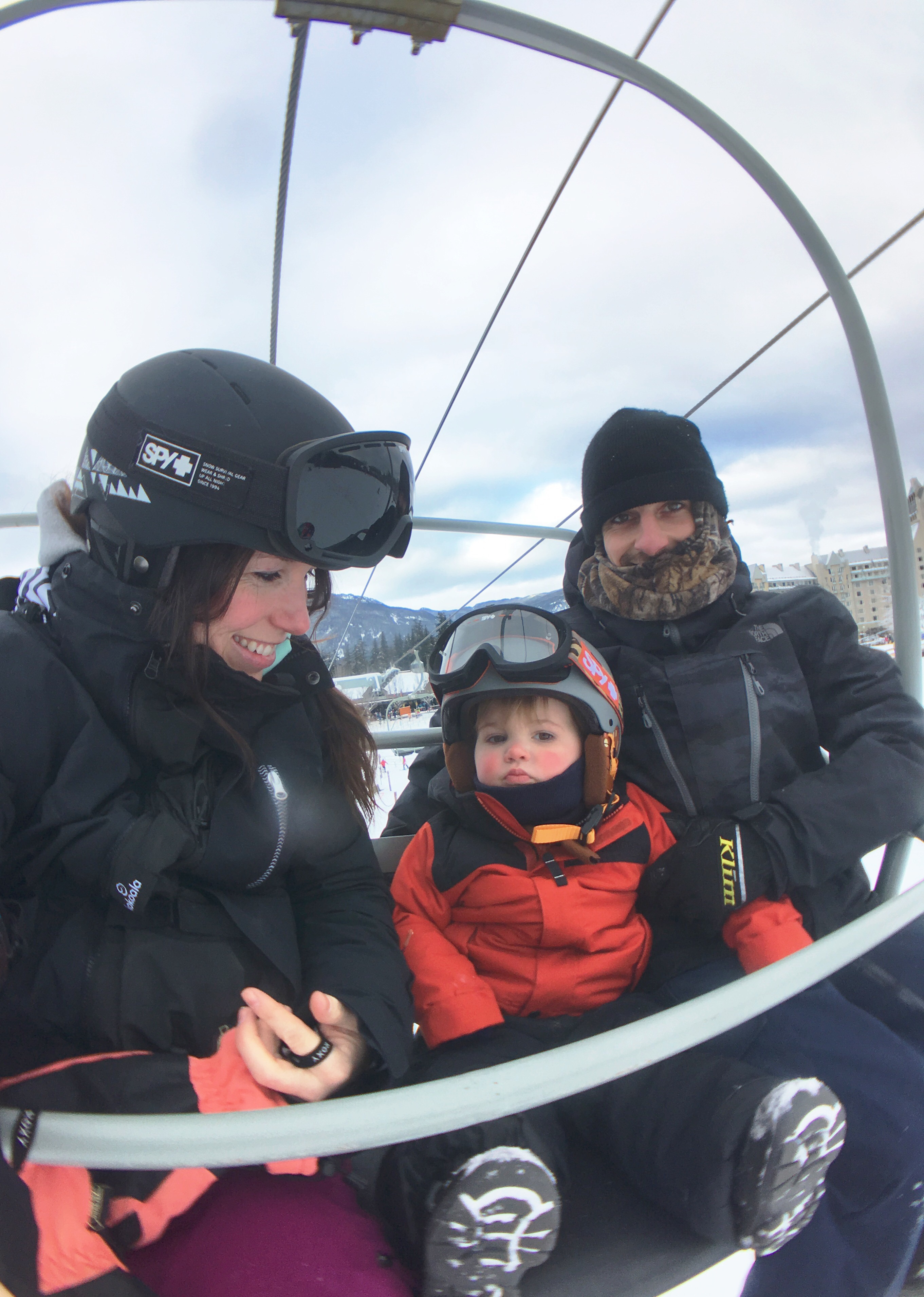 Start them young they say

We are so lucky here on the west coast, I feel like we are closer to the outdoors than anywhere else. We have so many opportunities to get out and explore, try new sports and get creative with the kind of activities we practice. For example, with our snow season that goes from mid-November to end of May, even end of July if you count the summer glacier riding, we have so many opportunities to get on the slopes. The weather here is also really mild, comparing to back east where I’m from, I’m not sure I would be going up the hill every weekend with my little one at -30 degrees. Instead, we sometimes complain on those days where it’s -10 and we think it’s cold for January… We are actually pretty lucky weather wise here on the west coast.

My son Jackson is 2 years old and has been loving the time we spend up on the hill. He has been ripping down the mountain in between his dad’s legs since the season started and can only ask for more “More snowboard daddy, More snowboard” “ Go, Go, Go” he says when JD starts slowing down. He’s addicted to snowboarding already at his young age, he loves going fast down the hill, hitting small side hits with daddy and those little pow slashes they get from fresh pow on the side of the slope.

He also has his own little Burton snowboard that he loves to carry around and being strapped to while ripping down the hill. It’s so impressive how kids get it right away, you don’t even need to tell them what to do, they will figure it out. The first time we strapped him onto his board on a flat surface, he started wiggling his hips back and forth to get some momentum, just like he’s already done it before and knew what to do. That blew my mind and made me realize how much smarter they are than what we think. At that age they are such little sponges and can pick up anything, that’s why I think it’s so important to start them young. I also think that teaching them with a friend will be a lot easier too, kids learn really fast and seeing another little human of their age trying to snowboard as well will make them want to do the same and try harder. A young child needs confidence that what they are trying to do is possible and that they will be able to do it when they see another little one doing it, they just want to do the same. The first time Jackson actually enjoyed being strapped onto his board was when our good friend Maude and her Daughter Jade came along with us on an afternoon snowboard mission. Right away, when Jackson saw her grab her board and started dragging it with her riglet he wanted to do the same. They went on for an hour or two, wanting to be pulled back up the hill and snowboard down. It’s always so much more fun with friends. 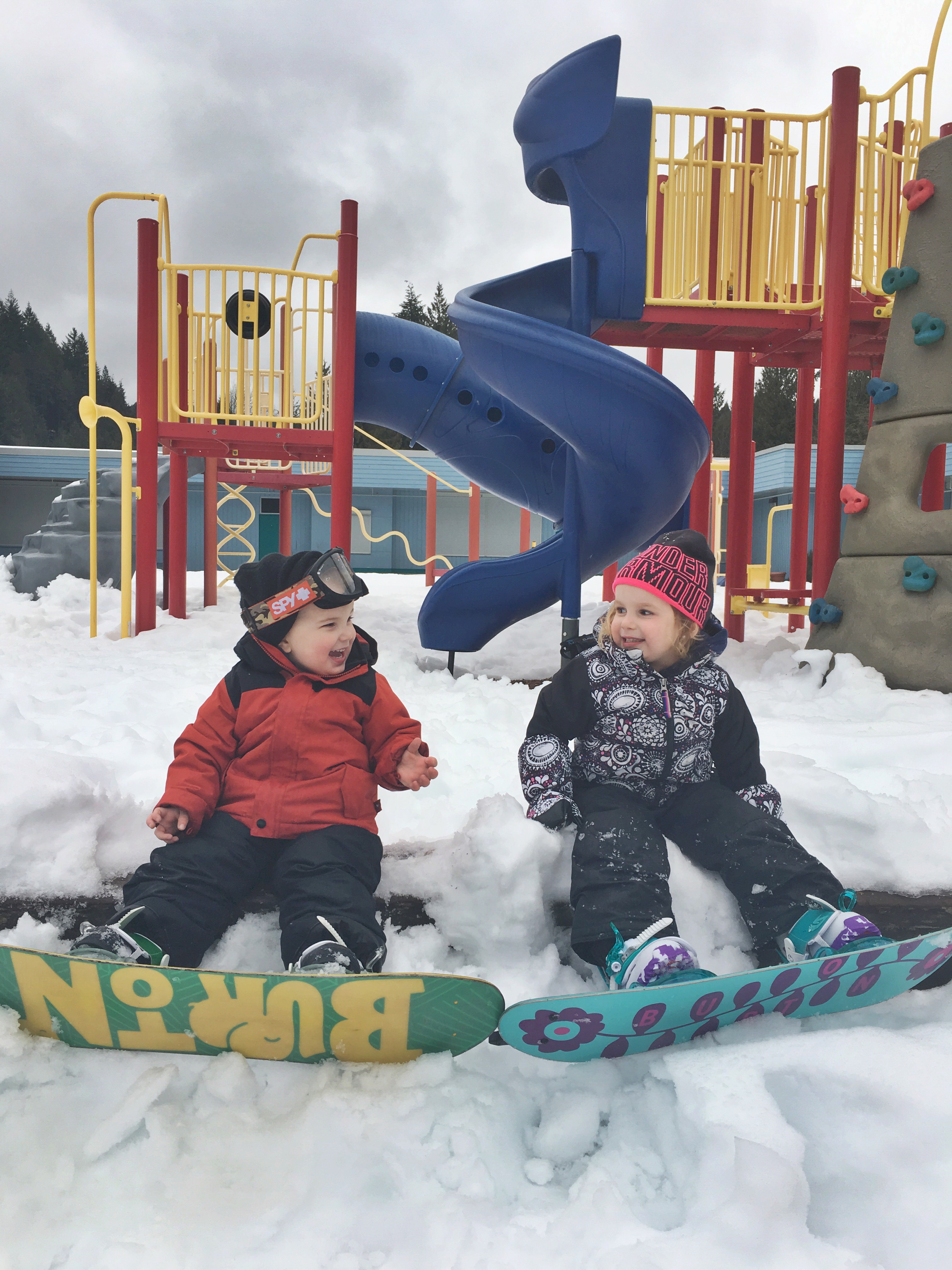 Now we’re at the stage where every time we go up the mountain, we get him on his snowboard so he can rip around on his own for a while, then when he starts being tired of it, he usually asks to snowboard with daddy and then we keep on riding with him between JD’s legs. The long gondola ride back up usually makes him fall asleep after a morning of riding. Then it’s time for a nap in the Round House for Jackson and mom and dad will take turns doing some laps. It makes for long days on the mountain and everyone enjoys their day.

If you want to see more of Jackson’s snowboarding adventures, you can check out this video or go visit my Instagram page where we try to post all of our family adventures.

Want to know how to get started?  CLICK HERE  to read our post about “Starting A Toddler On A Snowboard”

5 Tips for Photographing Toddlers In the Wild The Little Explorers mission is to create social connections between families with young children through activities focused on the exploration of the outdoor environment and the thrill of adventure.

Yeah! Super happy to announce that our bike club is running again!

The little ones had so much fun riding their bikes on the pump track yesterday! Stoked to have my crew of mini shredder back!

Hey guys, we are doing another adventure book giveaway!!! Yeah!

I’m super excited to announce that I have partnered with @theadventurefriendsbook the author of « The adventure friend’s ski day » an awesome book that will make you miss the winter! We’ve been reading it so much and we just cannot wait for next season!

To enter this contest:

This contest is open for Canada an US only and is in no way related to Instagram.

Good luck everyone! You have one week to enter this contest (June 25 @5pm PST) and the winner will be announce on June 26th

The set of rock stacking

Well done @thefrankofamjam and what a view!

May the 4th be with you theme! LOVE THIS!